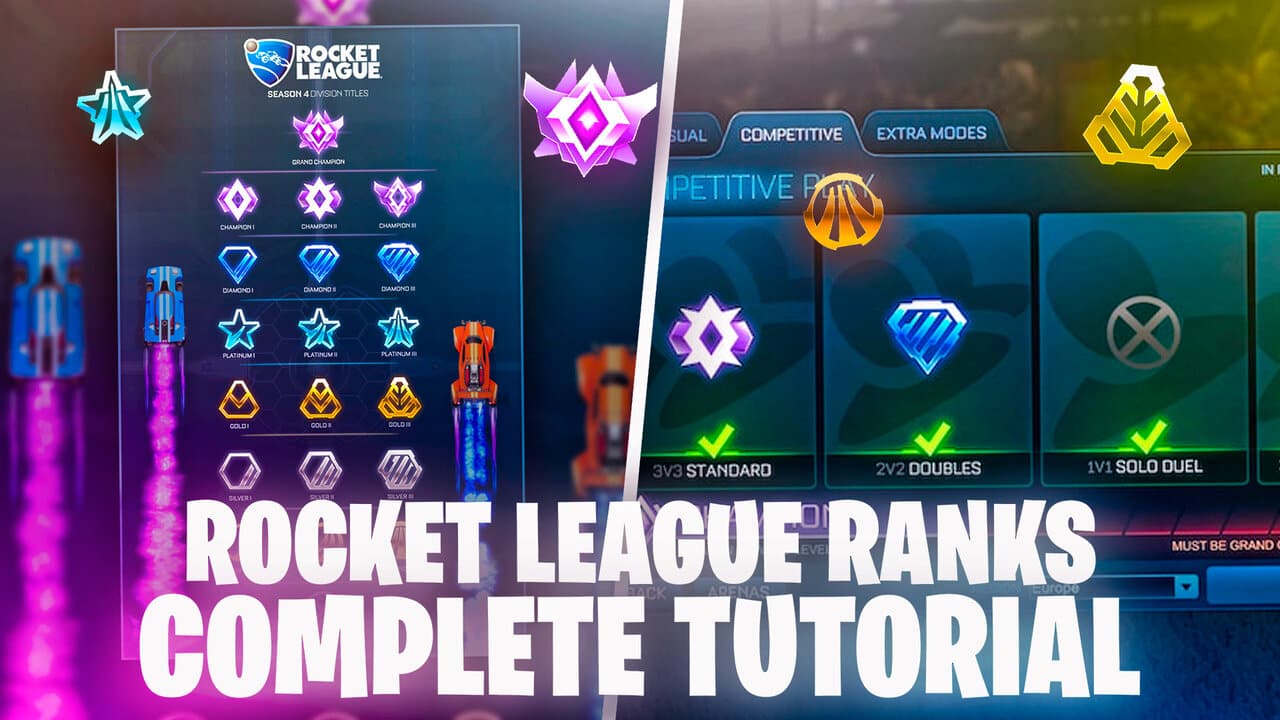 Interested in learning more about Rocket League’s Ranking System and MMR distribution? This article covers the fundamental aspects of Rocket League Ranks and seeks to improve your skill level within Rocket League itself.

How do Competitive Playlists Work in RL?

After booting up Rocket League you are presented with a variety of different options. These include two distinct playlists, casual and competitive. Within a competitive playlist, you are given alternative game modes such as:

Solo Duel revolves entirely around raw skill. The amount of strategic planning taking place both inside a player’s mind and on the field is massive. However, negative emotions such as toxicity and anger come out of this playlist as there is no one to blame for your mistakes other than yourself. Well known one’s players such as ScrubKilla or Joreuz perform well in this area.

Doubles would be considered the perfect balance between a ball hogging one’s player and a team coordinator. Both teammates need to operate collectively in order to score the ball in the net. Positioning and map awareness plays a huge factor in a doubles game.

In a Standard match, teammates are your key to success. Due to the number of players in the match, each and every player needs to position themselves strategically and undertake a well-coordinated effort. Players on the field also need to undergo a mindset strong enough to break any barriers inside and outside the area of play.

Rumble is similar to a standard match but more chaotic. Once using a powerup, a cooldown of 10 seconds begins, randomizing your next powerup. When a goal is scored, that powerup is lost and the cooldown restarts.

Dropshot involves blasting the ball through an opponent’s floor. Sounds easy right? Here’s where things get tricky: Your hits can be catastrophic to your team if the opposing team supercharges the ball into your side of the field. Given this information, teams need to make every hit valuable as one wrong choice can cost you the game.

Hoops takes Rocket League to a whole other universe. Instead of being limited to shooting the ball in a net that has been placed on the ground, this net is placed above ground, similar to basketball. Players are required to make vertical shots, with the backboard playing a key role in dunk plays.

Snow Day offers a different approach to a standard Rocket League match with a twist. Instead of the traditional Rocket League ball, a hockey puck is used to score goals. The hockey puck isn’t as versatile and flexible as the regular ball, but you can still make some pretty fast pinches!

What Competitive Ranks are there in Rocket League?

Recently updated as Rocket League launched its free to play update, the competitive tier list gained some traction within the community. The end of season 14 also brought the addition of a brand new rocket league rank: Supersonic Legend. Below are the current ranks obtainable within Rocket League:

How to Get Your First Rank in Rocket League?

I myself recall when I first started playing rocket league before the free to play update, the ranking system devised by Psyonix was a bit off. Grand Champion level players were hard stuck in platinum, and I was doing my best to get out of Silver. Luckily, I found a reliable set of players that helped my team prosper to the top. At the end of the season, I was not silver 1 anymore, but rather a silver 3. The small things can get you from gold 1 straight up to platinum 1. Heck, I’ve even seen some platinum 3 players climb to diamond 2!

How to Increase your Rank in Rocket League?

Increasing your rank in Rocket League requires proper training, grit, and determination. Unlike other video games, Psyonix made Rocket League to strictly revolve around mechanical skill.

Here’s a quick coaching guide by yours truly to help with your competitive endeavors:

What is Ground dribbling?

What is Air Dribbling?

What is Shadow Defense?

What is Boost Management?

As a semi-decent Rocket League player, you must learn how to feather your boost when going supersonic. This ensures proper boost management and saves some fuel in the tank. Like many, you may also incorporate diagonal flips and small amounts of boost to achieve more efficient 0 to Super-Sonic speed. Rotate correctly and efficiently, following boost lanes whilst not getting in your teammate’s way or stealing their boost. One may also rely less on big pads and pick up more small pads. Understand and memorize where the boost pads are placed on the map. This will help you collect multiple small pads and allow you to deal with any situation regardless of your position within the field.

Rocket League Divisions are essentially ranks within ranks. Confusing right? Don’t worry, this system works flawlessly to satisfy every player’s needs. There are four divisions within every rank, being:

It’s hard to provide accurate MMR calculations as the current season is still in its baby steps, but we did our best to provide you with useful Rocket League Rank Distribution:

What is MMR in Rocket League?

MMR is a value that represents your rank in-game. Your rank is determined by your MMR number. This allows Rocket League to be able to match you with opponents of similar skills.

How can I locate my MMR?

In order to determine your MMR value, launch Rocket League and travel to competitive play. There, you will be presented with numerical values beside your division. This numerical value serves as your MMR.

You can also locate your MMR using various tracker websites such as:

How do I increase/decrease my MMR?

How is MMR determined by the skill level of my opponents?

When matched against an equally ranked opponent, you will gain or lose the average amount of MMR.

When matched against a higher-ranked opponent, you will gain more or lose less than the average amount of MMR.

When matched against a lower-ranked opponent, you will gain less or lose more than the average amount of MMR.

Remember: The more games you play, the easier it is for the system to determine your competitive rank accurately.

Given this new free to play update, an influx of player to player communication, and changes within the ranking system, season rewards still continue to prosper. In due time, we may be seeing some flashier rewards, but for current players here are the new rewards for season 1 of rocket league.

These rewards are available to all players depending on their rocket league rank. (i.e a bronze player only obtaining bronze rewards and vice versa.)

In this article, we’ve gone over competitive playlists, ranks, ways to increase your rank, and season rewards.

Here are a few key points mentioned in the article:

Two distinct playlists, known as casual and competitive are presented to the you when launching the game. In these competitive playlists are individual ranked game modes such as solo duel, doubles, standard, rumble, drop shot, hoops, and snow day. RIP solo standard, you won’t be missed.

There are a variety of different ranks within Rocket League, ranging from bronze 1 to supersonic legend. Oh, and grand champion isn’t the new top rank anymore. Thank the new free to play update for that one.

Before acquiring that beloved diamond 1 rank you dreamt of, you first need to play your placement matches in the playlist of your choice. These tend to take some time and end once the seasons deadline is completed. Whatever you get placed, just know that it took us veteran players a couple of months before we were placed at diamond 1.

Ranks matter, but not as much as divisions. Divisions are where the spice is introduced to the Rocket League ranking system. New players tend to overlook this aspect and only see their current ranking for the season. Divisions are sub ranks within a rank and can be applied to all ranks (including gold 2 players).

Increasing your rank in Rocket League is easy if you know where to start. Too many players see Rocket League as a simple game of car soccer, whilst these players tend to end their Rocket League journey the second they get scored on. Always maintain proper boost management, aerials, air and ground dribbling, and an overall growth mindset. Like all coaches would say, even if you blame your teammates for your mistakes, we all know you’re stuck in gold 2.

Competitive ranks aren’t just a way to show off, but rather include some flashy rewards worth striving for. These competitive ranks grant the player with new goodies to design your car with. They are what every person dreams of, whether you are stuck in gold or diamond.

The end of season 14 brought the removal of solo standard. Rocket League ranks can now not be obtained through solo standard as solo standard is not playable anymore. Although old players were bummed and new players for one didn’t care much, Psyonix was leaning towards removing it ages ago.

MMR values directly correspond to the Rocket League ranking system. In a standard match, a player could be considered Bronze 2 if their MMR is 192 or above.

Your MMR value is measured by whether you win or lose a game. In rare occasions, your MMR may or may not change after losing a ranked game. However, as analyzed from season 14, a players MMR is more likely to change given these three factors:

Rocket League is full of insane system subcategories that can seem overwhelming to new users, and we at rl.exchange hope to make your playing experience much more enjoyable. Wish to see more? Check out our other blogs! 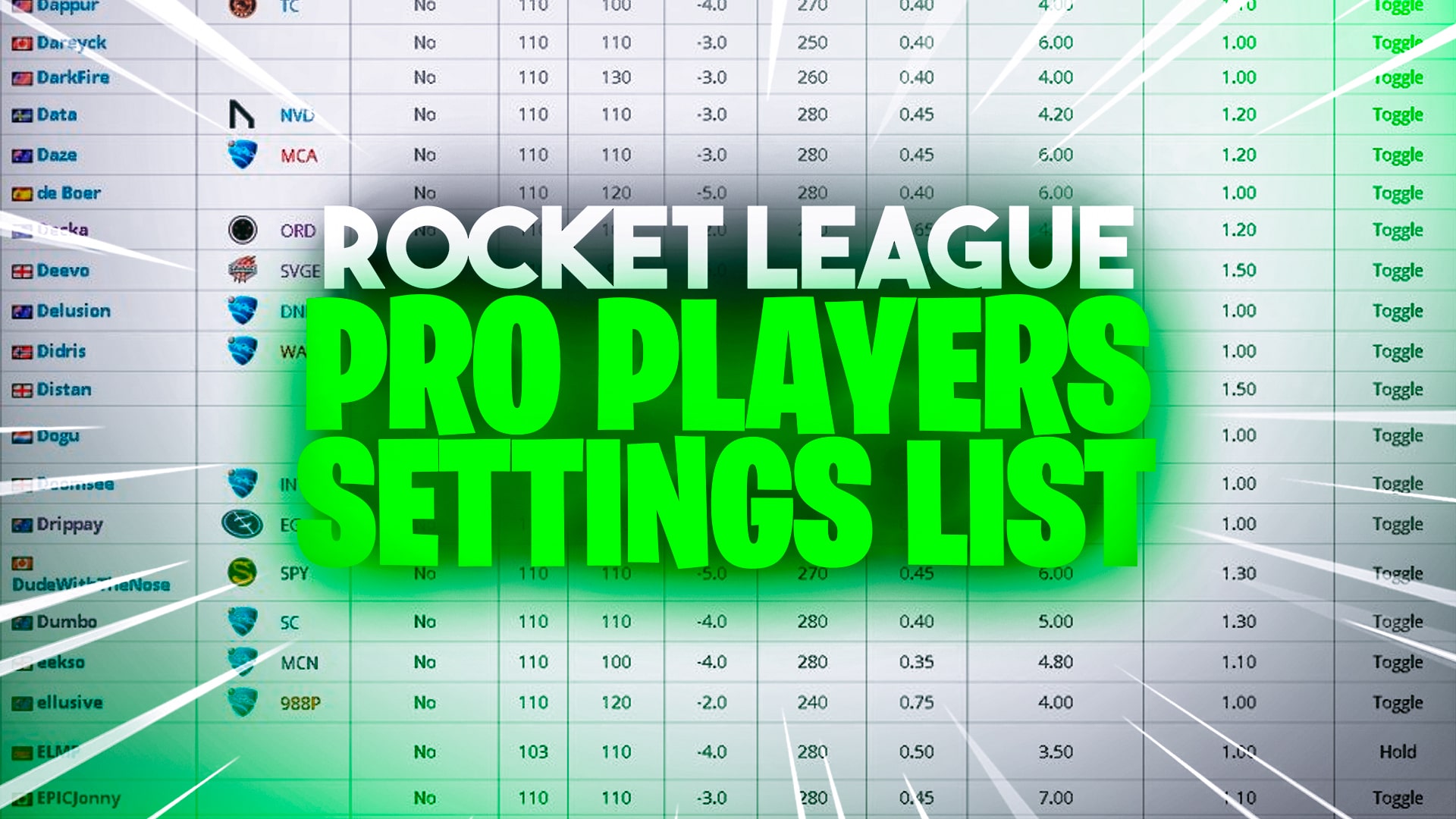 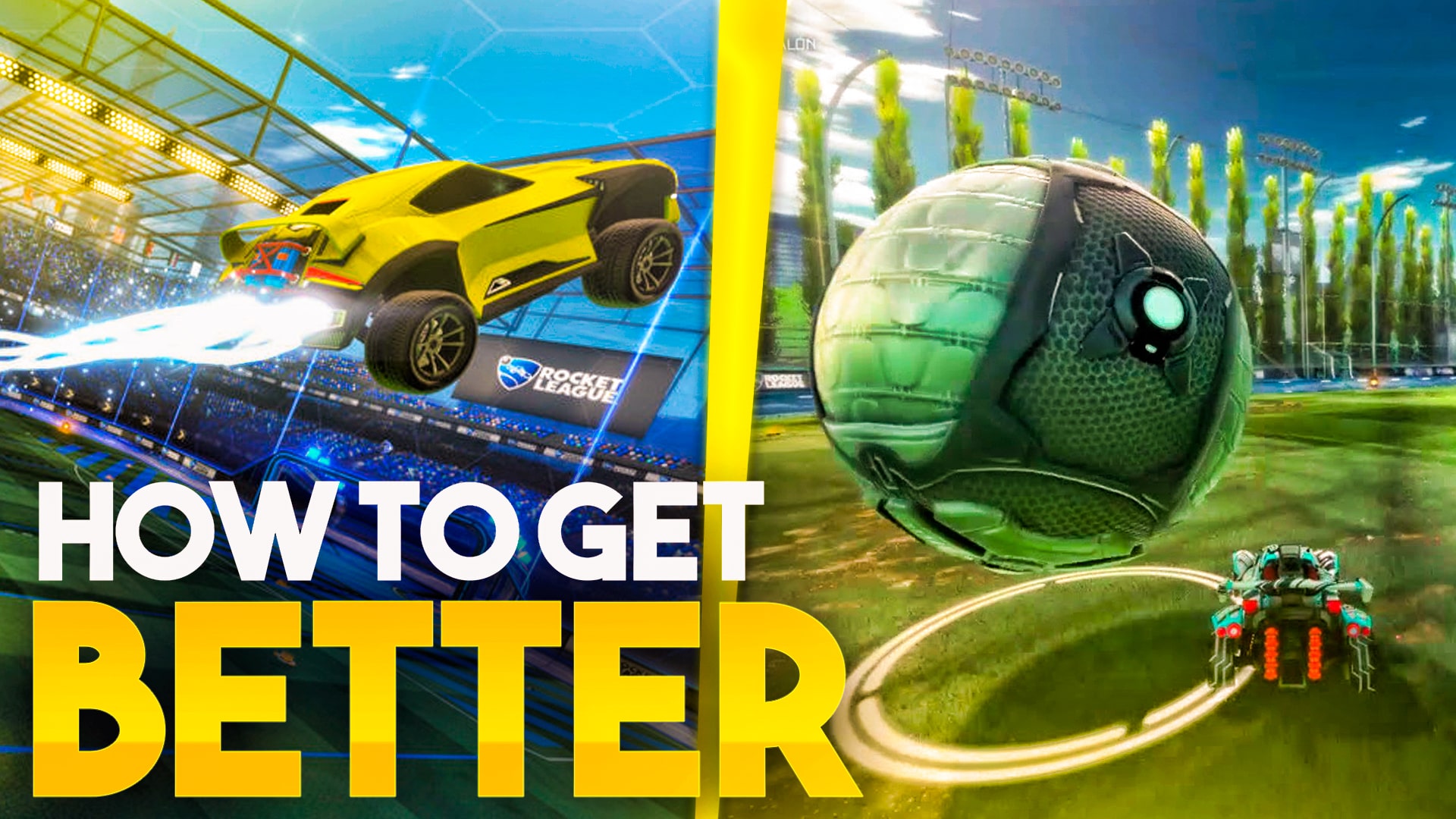 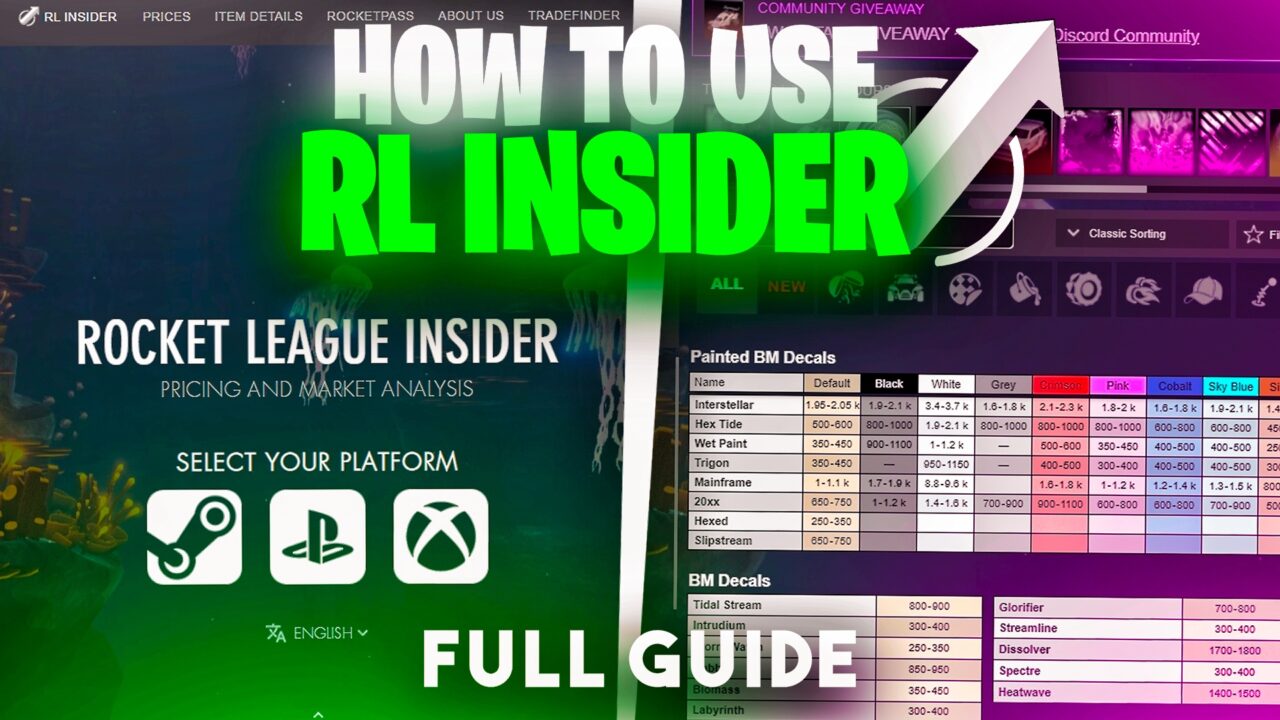 Rocket League is full of surprises, from scoring flip resets to buying loads of Titanium White Octanes. However, in order to make the most out of your trading career, you need reliable prices. Don’t know where people undergo analysis for items? Instead of using RL Insider, we highly recommend visiting our new and updated item […]